Extraction techniques for Carrara Marble: All you need to know

Ever since ancient times, the extraction techniques of the marble from the Alpi Apuane have profoundly conditioned and “sculpted” the Apennine landscape around Carrara. Indeed, up till the XVI century, the techniques used for the development of the marble basins had been directly inherited by the Roman quarrymen of the first centuries before Christ and consisted of the careful use of the subtle cracks which divide the different layers of marble. The slaves, thanks to metallic chisels and wooden wedges which were inflated with water and then placed inside the natural cracks, easily managed to separate the marble blocks from the mountain which were then transported down to the bottom of the valley. Back then, the “lizza” was used for transport (a large sledge secured by a metallic cable which slided on lubricated logs).

With the arrival of explosives, the excavation procedures changed drastically and the Apennine landscape went through a profound change. The typical “ravaneti” appeared a bit everywhere, formed by large buildups of debris, which were witness of the large waste of marble products due to the explosions. Steep “rocky roads” (“vie di arroccamento”) go through these “moulds” of debris thanks to which one can reach the extraction basins. Little by little, the first industrial activities linked to the working of the marble begun, with factories for the cutting and polishing of slabs. These first productive units concentrated themselves at the bottom of the valley in order to benefit from the hydraulic energy generated by the rivers.

The helicoidal wire that was used to cut the stone from the end of the XIX century onwards represented a real revolution. This metallic cable, capable of digging in the stone, pressured together with a mix of water and sand, substituted almost completely the explosives and determined another visible change in the landscape. The mountain stopped being destroyed, leaving behind piles of wreckage, and begun to be literally “cut”, sculpted with precision, creating surreal landscapes made of huge flights of steps, and platforms called quarry warehouses (“piazzali di cava”) where the stone is cut and prepared for transport. Once the long and tormented period of the “lizza”, the period of the four wheeled carts driven by ox and the short period of the marble train, the quarries are today equipped with installations which allow for the cutting of enormous masses which are then reduced to smaller blocks, which in their turn are sent by truck to the sawmills, the factories and the port.

The old “rocky roads”, now an integral part of the landscape with their accidental zigzags, are the quickest and cheapest way for the “capillary” service of the quarries. Along the inaccessible road, the trucks, forced to dangerous manoeuvres, come and go “naturally”, going through first the Carriona Road and then the city before reaching their various destinations. 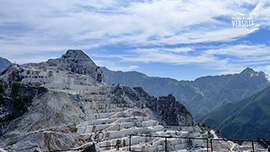 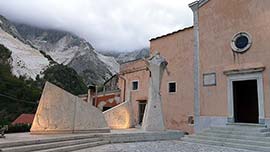 Extraction techniques for Carrara Marble How to reach: 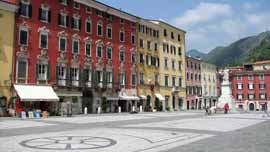