Versilia: Famous for the Carnival, its long promenade and the vast golden sandy beaches.

Viareggio: All you need to know

Elegant and refined Viareggio is one of the more famous coast resorts in Versilia and a tourist destination known all over the world. It is an amusement-centre, the country of the Carnival and of the night-refinement with its advanced anf first-rate night-clubs and premises. The night lights make room for a lively and coloured landscape in summer and for wonderful sunsets and tranquillity in winter. Anyway Viareggio is always the right place to visit as it displays, during every season, different kinds of tourist attractions.

The historical traditions are scanty: its name derives from the tower in Via Regia, which was built during the XVth century by the inhabitants of Lucca. In that period, once the Burlamacca's outlet had been make in working order, the arbour become lively and trading was set going. Anyway the real industrial growth starts only some centuries later and was based mostly on shipyards. The sea, the big ally of the inhabitants of Viareggio, constituted the starting-point to build the fishermen's boats. The development and growing of the town have caused that, nowadays, yachts and posh boats are designed and built in the same shipyards. Anyhow tourism is still Viareggio' strenght: you only have to note that in the beginning of the 20th century the bathing huts reached already 3000 units, to see the neverending development of this tourist resort . The landscape is unique thanks either to the greenery of the hills, the pinewoods, the blue sea and the carnival which enlivens this town every year through a long parade. Custom, actuality and policy are the targets of the organizers' imagination.

The carnival was born in 1873 and is as famous as the Rio carnival. Another important local tradition is the Literature Award (created in 1929 by Leonida Rapaci) still following the development of our literature. The architecture in Viareggio is not very interesting due to its mogenious art-nouveau style designed by the architect Belluomini and to the ceramics by Galileo and Chino Chini. It's worth visiting Matilde's tower and Shelley Square where you can see a bust representing the poet.

Carnival of Viareggio 2020 PROGRAM and TIMETABLE

The appointments of the Great Masquerade Courses on Viali a Mare in Viareggio this year will be 6!

As an absolute novelty there will be the night parade on Thursday 20 February to celebrate Fat Thursday: 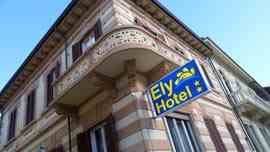 A few meters from the sea and the beach of Viareggio. 2-star hotel with Wi-Fi and Restaurant.

The sea promenade of Viareggio

We took a walk on the promenade of Viareggio. Shops, bars, restaurants and the Ferris wheel of Versilia.

For lovers of uncontaminated and wild natural beaches, we recommend the Free Beach of the Darsena in Viareggio.

Viareggio How to reach: