Filetto Market: All you need to know

In this small suburb every year, in the second two weeks of the month of August, the Medieval Market develops him: a fascinating demonstration with the boundaries, the towers, the plazas, the streets that are decorated of standards and illuminated by ancient torches and animated by witches, jugglers, musicians and minstrels, and acrobats to accompany the characters that give life to the typical market; besides in the ancient funds objects of the local craftsmanship can be purchased in iron, wood, stone and marble.

The walled Filetto village's origins, totally original for its structure and position in the whole Lunigiana, must to be linked to the presence of the Byzantine boundaries defence, which, in the VI and VII centuries, concerned in its central part the most part of the valley. The village inside, reachable through two monumental doors, presents some architectural examples centralised on the piazza della Chiesa's sides. On the western side of the square thereÆs the Palazzo dei Marchesi Ariberti, masters of Malgrate and Filetto since the XVII to the XVIII century, massive seventeenth century building connected to the village and to the church by two elegant air connection passages.

Filetto Market How to reach: 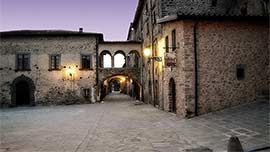